Stanchions for crowd control solutions at Louisiana's best venues are found at CeremonialSupplies.com. We have classic stanchions in gold or silver and velvet ropes, plastic barrier posts with link chain, or pole stanchions with retractable belts, take your pick! Most of the state's busiest entertainment locations are either in the capital, Baton Rouge, or in New Orleans, Louisiana's largest city. These venues, from the colonial era French Quarter to the Superdome, have one thing in common: crowd control strategies to move people swiftly from entrance to destination. It used to be that any type of barrier post and rope would do, but now with the sophistication in manufacturing materials there's no reason why the design and decor of any destination in the Bayou State can't have matching stanchions and rope to complement the overall aesthetics of a location. Here's our take on how to best match crowd management tools with architectural design in the melting pot of French, Caribbean, American, and French-Canadian cultures that is New Orleans, Louisiana. 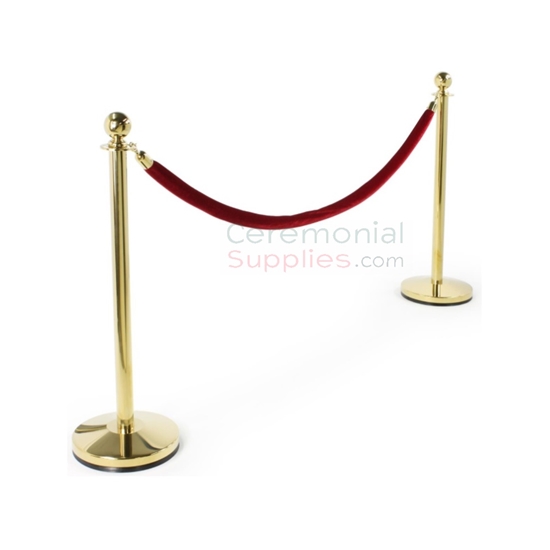 Undoubtedly the most popular destination in Louisiana is the historical French Quarter, the oldest area of the city more properly known as "Vieux Carre" which is French for "Old Square" since it was founded in 1718 as a military grid of seventy squares. The legacy of this period endures today in Jackson Square, church of St. Louis, the architecture of the oldest buildings, and in the street names, as well as the mixed Creole culture of African origin that gives us Mardi Gras. Hotels from this era that thrive today in the Big Easy are for example, the Bourbon Orleans, where the hushed, Quadroon Balls took place. Quadroons were free women of mixed color, the result of relationships between wealthy, white landowners and black women. These wealthy men took care of their mixed race children, and the girls, when they came of age were presented in society at these balls where their mothers played matchmakers and essentially sold them to white men of means. These young ladies became kept women- mistresses, who were set up in a home of their own with their own income, and the children were taken care of and received top notch education. It sounds kind of romantic but the oral history passed down from the servants at the Bourbon Orleans have a more perverse myth of what really went on at the Quadroon balls! Today, nestled in the heart of the French Quarter, the posh hotel is a perfect example where the classic, gold colored brass stanchions with velvet red ropes are perfect to guide the flow of people. The classic, brass stanchions with dome top are the most requested crowd management items at CeremonialSupplies.com because of their quality, longevity and functionality. Whether to streamline a group of conventioneers at check-in, or guests at a ballroom (yes, the same Quadroon ballroom!) these classic stanchions blend and complement the upscale French and Creole design of the Bourbon Orleans.

Fifty years after the French founded Louisiana, King Louis XV gave it to his cousin, Bourbon King Charles III of Spain. The Spanish ruled Louisiana for 40 years until the Louisiana Purchase in 1803, but during their rule, the Spanish left their mark in the design of brick houses, walled courtyard gardens, graceful wrought iron balconies, and the Cabildo, the seat of Spanish colonial city hall of New Orleans, and the home of the Louisiana State Supreme Court. The Cabildo is today a museum that houses many rare items of America's history. It was in the elegant salon of the Cabildo, where the transfer ceremony (one of those events we love so much!) of the Louisiana Purchase took place. The design of the building is decidedly Spanish, and here too the stanchions and rope used for guiding museum goers through the exhibits, are the traditional brass stanchions with red velour rope following the rich, royal Spanish influence in the history of New Orleans.

The site where the Mercantile Hotel in New Orleans stands today first opened its doors in 1907 as the Henderson Sugar Refinery. The landmark building changed hands in the 1980's and after becoming part of the Innisfree Hotels, it was renovated and beautifully transformed for its grand re-opening this year! The hotel has the latest in hospitality technology and its crowd control is best complemented with CeremonialSupplies.com chrome plated stainless steel stanchions, or the black finish stanchions. These models are available with the flat top, or the urn top and include a four-way adapter disc to create the line configurations that you wish. Velvet stanchion rope available in blue, red, or black with latches in chrome or black to match the selected stanchion. Modern architecture that tends to be minimalistic and tech inspired is best accessorized with these two styles of stanchions.

Sometimes it's necessary to set up crowd control equipment outdoors. This is true when managing the movement of tours, visitors, and corporate events to New Orleans historic plantations, famous for having been the setting in popular movies. Oak Alley Plantation for example, on the west bank of the Mississippi River in the community of Vacherie, St. James Parish was established in the 1830s to grow sugarcane, or "white gold" as it was called because of the large profits it yielded, was the setting for the movie "Interview With The Vampire," and its famous 800' entrance alley framed with oak trees on each side was featured in the scene where Louis, (Brad Pitt) is seen riding in on horseback to confront Lestat (Tom Cruise). The mansion is visited by thousands of tourists annually and corporate events are held on site. CeremonialSupplies.com has a selection of outdoor, weatherproof plastic stanchions styled as hitching posts, which are compatible with the era, and provide not just crowd guidance but also add a decorative touch. Evergreen Plantation, the most intact plantation complex in the South, has the country's highest historic designation along with Mount Vernon and Gettysburg for agricultural acreage. It's located on the west bank of the Mississippi River between Baton Rouge and New Orleans. Evergreen Plantation was the filming location for the movies "Django Unchained," "Free State of Jones," and "Into the Badlands," and you can imagine it receives quite a hefty number of visitors! To manage crowd control, the outdoor hitching post style stanchions fit the bill perfectly. These sturdy stanchions are made from polyethylene plastic which makes them strong and durable. This is important for re-use. The hitching post style barrier posts are available through CeremonialSupplies.com and come in black, yellow, and white with matching link chain. These are lightweight stanchions that makes them easy to ship or transport. When it's time to use them they are filled with water or sand to provide stability. 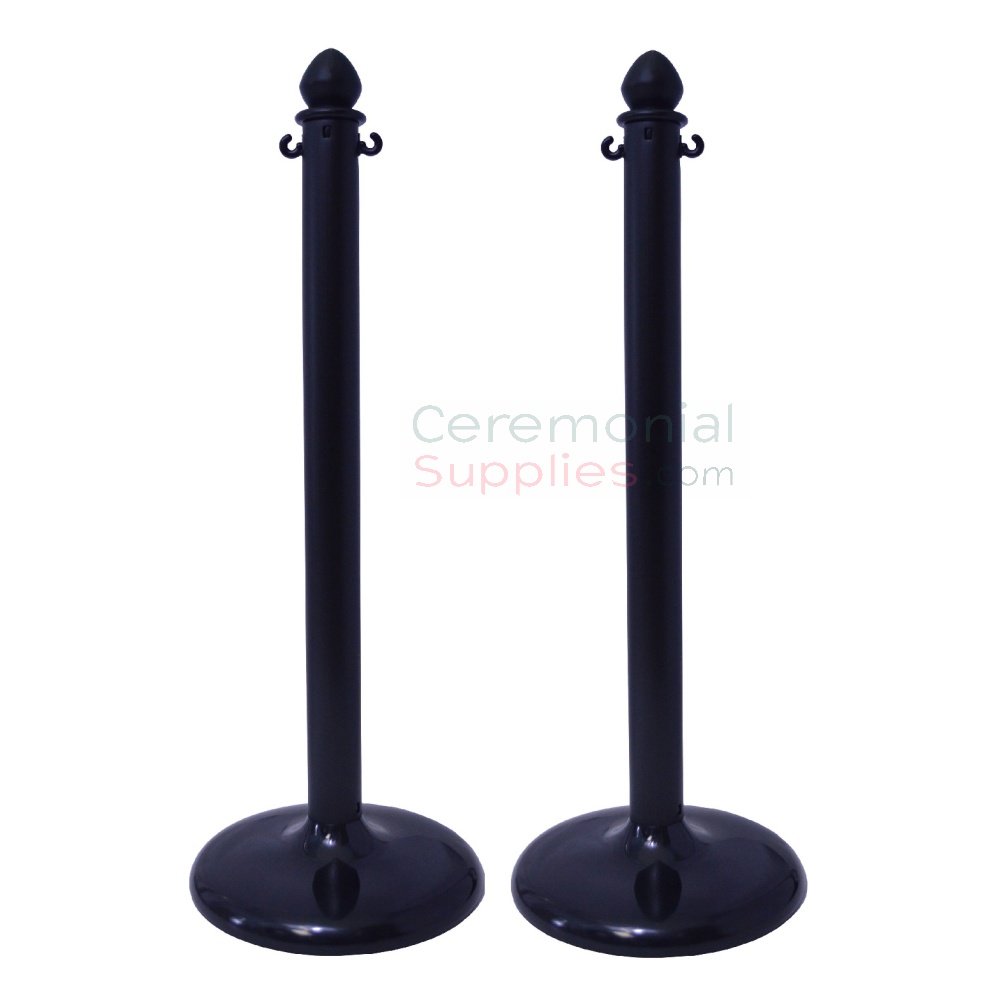 Located in the Central Business District of New Orleans is the Superdome, the 2nd largest sports stadium in the world. With an expandable capacity of 76,468, crowd control management is a must! The best stanchions for this venue are CeremonialSupplies.com retractable belt posts, available also in mini-size. These stanchions have a belt cassette feature that allows flexibility in arranging queues with endless combinations. These 4-way retractable belt stanchions are made from stainless steel in matte finish in black, chrome, or gold with belt choices in royal blue, red, or grey belt that extends up to 6' 5" and are ideal for the high traffic volume of the Superdome. For events where visibility is important, such as the New Orleans International Auto Show, the best way to rope off or protect the exhibits is to use the retractable belt mini stanchions. CeremonialSupplies.com has a selection of mini stanchions in chrome, brass, and black matte, with a height of 24" and a retractable belt that expands up to 11' for space economy. Designed to protect and exhibit while saving floor space for better view and lower the risk of damage to the display. Also available for the retractable belt stanchions are two-sided sign frames in stainless steel chrome finish with an attachment cup that locks into our 4-way stanchion adapter top. 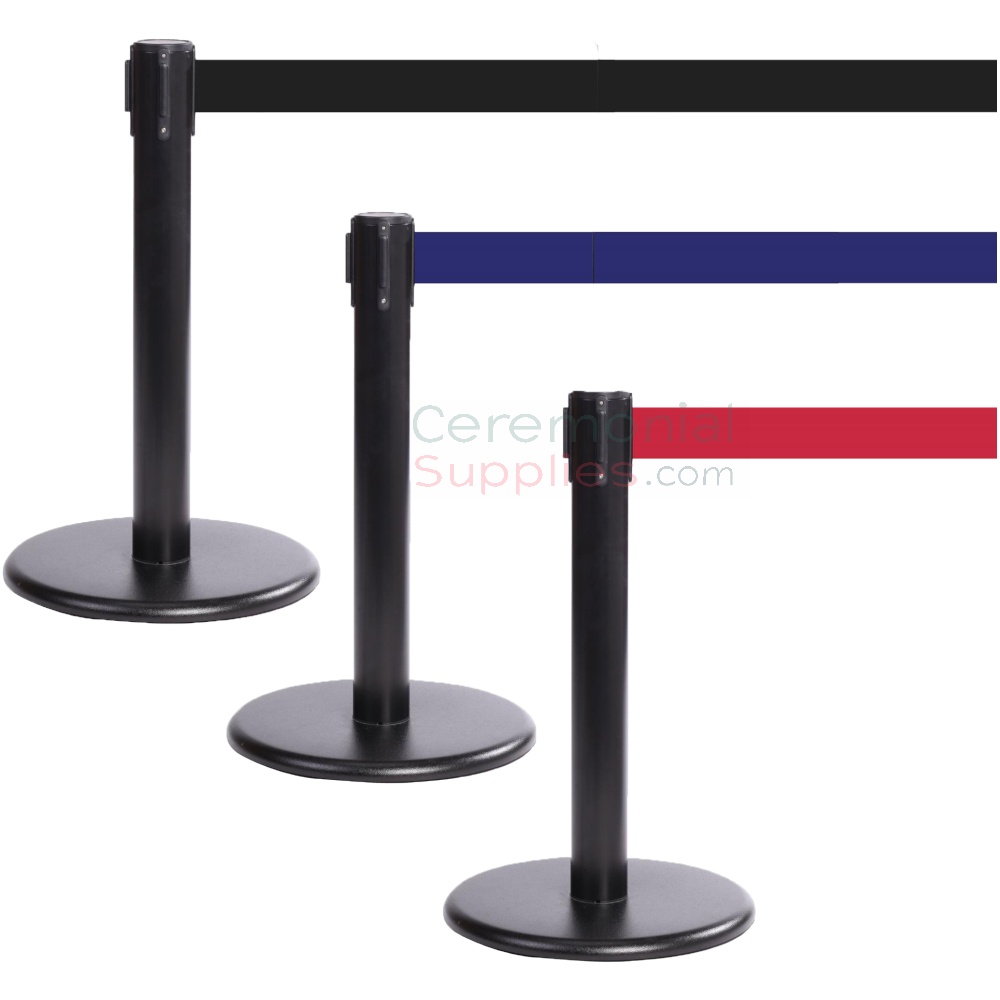 Stanchions and rope and other barrier posts are no longer just functional crowd management tools, and have become an integral part of a venue's overall design and architecture. For the best quality crowd control products, shop CeremonialSupplies.com where you will find the highest quality products at friendly prices, attentive and knowledgeable customer service, and flawlessly efficient shipping in Louisiana - from Ida, Springhill and Shreveport to Oak Grove, Tallulah, Lafayette, Baton Rouge, New Orleans and anywhere else in the world for that matter! Count on CeremonialSupplies.com, the best one-stop shop online for stanchions and rope, to provide the ideal crowd control product for your venue. Click here for a shipping quote.