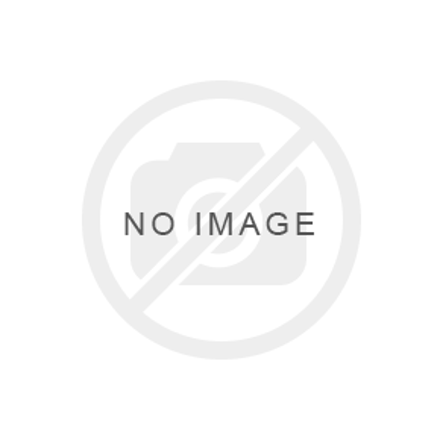 A formidable plaque to award to an achiever, this horizontally laid plaque measures 10 inches by 8 inches. The plate belongs to a black gilded kind, and comes with a cherry wood finish. The plate can be engraved with up to 13 lines of writing, with up to 35 characters (including spaces) in each line.

A beautiful 8 inch X 10 inch high-gloss plaque in cherry finish is the setting for a shiny golden Ceremonial Key to the City. Below the key, you have the option to add your logo as well as 6 lines of text on a black plate with golden text to dedicate the plaque to the deserving honoree.

This product takes between 5 and 7 business days before shipping. 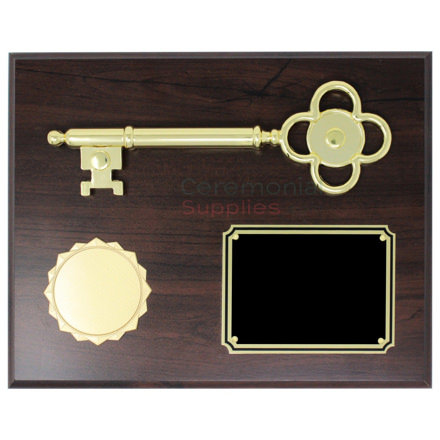 Key to the City Recognition Plaque

Measuring 8 inches by 10 inches, this Key to the City Plaque comes in a walnut finish with a 2 inch insert printed with your logo or seal, along with the option of up to 6 lines of engraved text on a 3 inch by 4 inch black screen plate laid in the plaque. The highlight of the plaque is an installed Golden Key to the City across the top. Key is made of brass with a fine gold color tone. 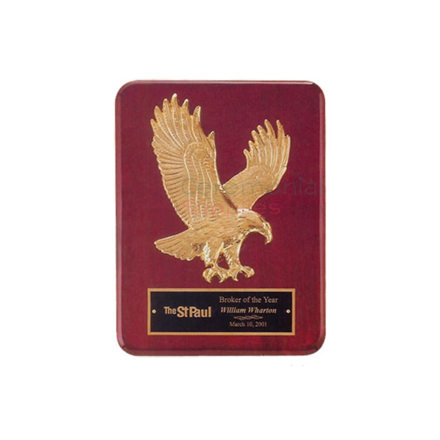 As symbolic as plaques get, this plaque is made of rosewood and comes with a piano finish in addition to the mounted bronze eagle. The plaque measures a considerable 9 X 12 inches and can be had with up to 4 lines of engraved text. 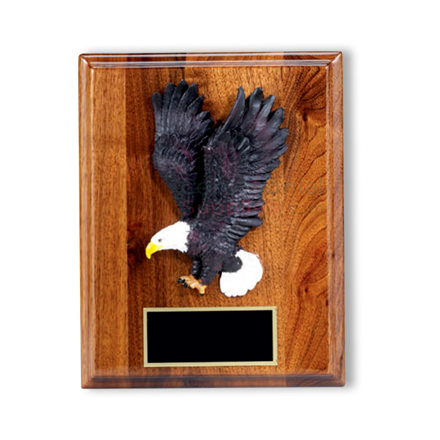 The American Bald Eagle Award Plaque is a plaque that measures 8 inches by 10 inches, and comes with an alluring and iconic walnut finish. The defining feature of the plaque is an eagle that is featured on it, painstakingly hand painted in all its glorious detail. The plaque can make for an excellent gift option to honor military personnel. Personalized message can be inscribed. Genuine walnut award plaque with 4-3/4" brass relief of American Eagle and a black plate with gold trim for engraving up to 5 lines of text. Total dimension of award plaque is 8" W x 10" H Polished lacquer cherry finish award plaque featuring a 4" relief sculpture of the American Eagle, and an American flag emblem shield designed to hold a 2" insert medallion of the Armed Forces. Medallion not included. Includes a black and gold plate that holds up to 5 lines of text. Total dimension 9" x 12" 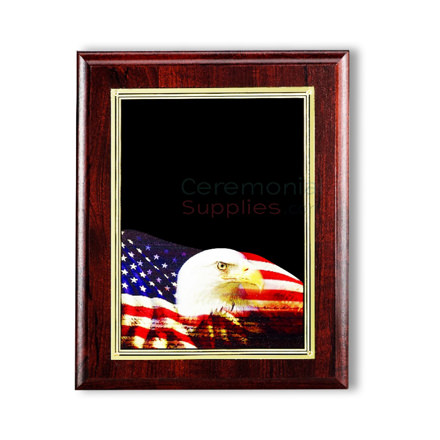 The American Flag and Eagle Plaque measures 8 inches by 10 inches and features a classic walnut finish. Features a 6 inch by 8 inch digital photo of an American flag and bald eagle with room at the top for custom text. 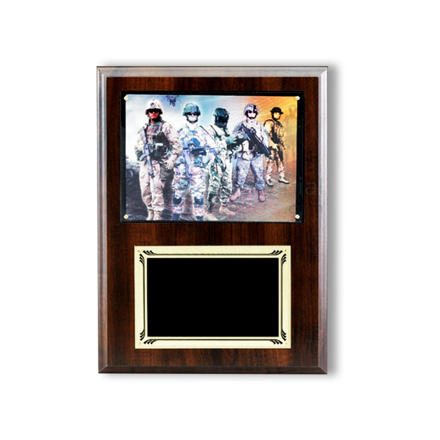 A stunning plaque measuring 9 inch by 12 inch, the Armed Forces Recognition Plaque features a beautiful walnut finish. Holds a 5 inch by 7 inch photo under recessed plexiglass (photo not included) and a 4 inch by 6 inch black screened plate ready to have text laser engraved. The plaque is an ideal way of honoring deployed units. 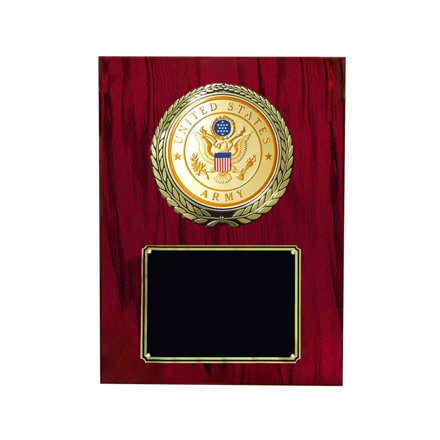 Vertical plaque 9" W x 12" H, glossed cherry finish holding a 4" diameter Army medallion surrounded by a bright gold wreath on top side, and a black engraving plate outlined in gold for up to 5 lines of text. 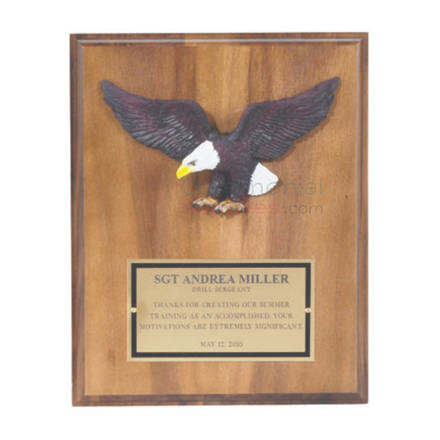 An instantly eye catching plaque that measures 8 inches by 10 inches, the Bald Eagle Award Plaque features an appealing walnut finish. On the plaque features a hand painted bald eagle, along with a brass plate that is large enough to feature up to 5 lines of text. This plaque is an extremely valuable gifting option. Option of two sizes, 7" x 9" or 9" x 12" genuine walnut wood board with brass eagle and black and gold plate that holds up to 5 lines of engraved text. 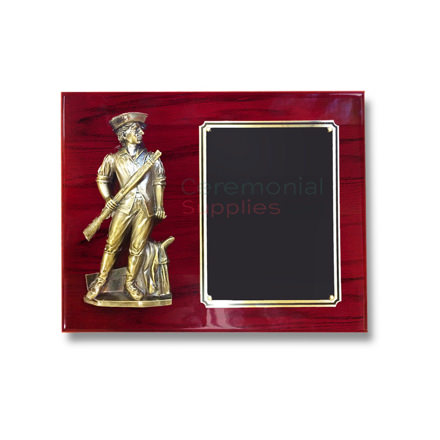 The Brass Minuteman Award Plaque is a ceremonial plaque measuring 8 inches by 10 inches. The plaque comes in highly attractive cherry finish that is polished for maximum gloss. The plaque’s unique feature is the extremely detailed 6 inch copper minuteman on it that instantly grabs your attention. The plaque also features a gold and black copper plate upon which you can have your personalized message or logo inscribed per your requirements. 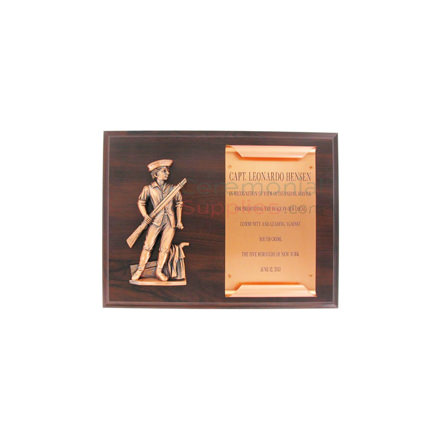 The Copper Minuteman with Scroll Award Plaque is a ceremonial plaque that measures 9 inches by 12 inches and comes in an easy to maintain simulated walnut finish designed to stand out. The plaque notably features an incredibly detailed 6 inch copper minuteman on it that elevates it above the competition. The plaque also features a 7 and a half inch by 4 and a half inch copper scroll plate upon which you can have your personalized message inscribed. 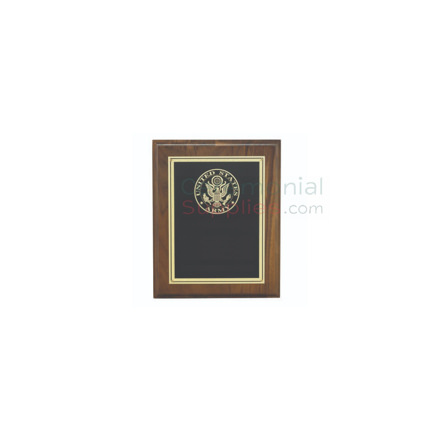 The US ARMY Emblem Award Plaque is a plaque measuring 8 inches by 10 inches, and features a smooth walnut finish. The plaque features a 6 inch by 8 inch brass plate with a frosted gold border, featuring a military branch emblem of choice and the option to have your message inscribed upon the plaque. This is a great option for honoring or rewarding military personnel for their service and/or achievements.

A momentous groundbreaking ceremony can be event more grand if it culminates with the presentation of an award that commemorates the event. The Groundbreaking Shovel Plaque is such an award. Measuring 10 X 8 inches and featuring an elegant walnut wood finish, this plaque comes with a 2 inch hand shake insert and up to 6 lines (1 header followed by 5 lines of the main paragraph) of engraved text on a 3 inch by 4 inch plate. 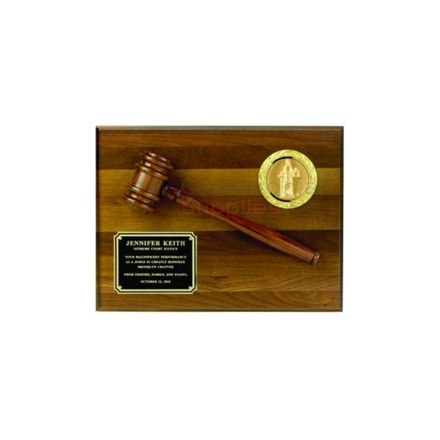 A gavel plaque measuring 12 X 9 inches and made out of genuine walnut, this is an excellent plaque when it comes to judicial recognition. The plaque comes with a mounted wooden gavel, a 2 inch 'justice' insert and up to 4 lines of text (1 header followed by 3 lines of the main content). 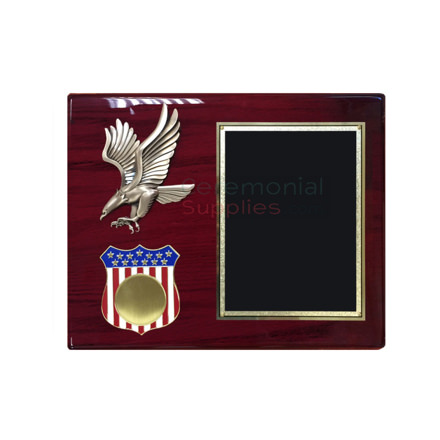 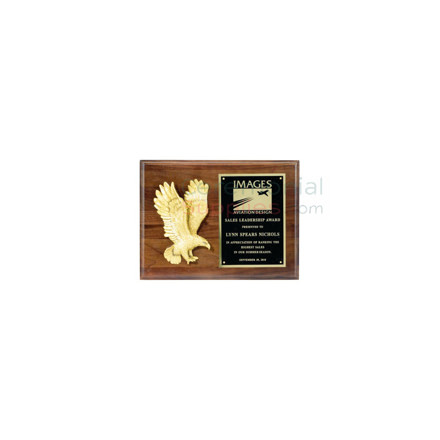 This uniquely gorgeous plaque measures 9 inches by 12 inches horizontally, and comes with a smooth to the touch walnut finish. The Horizontal Eagle Award Plaque features a 6 inch tall golden colored eagle, along with a black brass plate measuring 6 inches by 8 inches for a logo, an emblem, text or seal that you might want on the plaque. 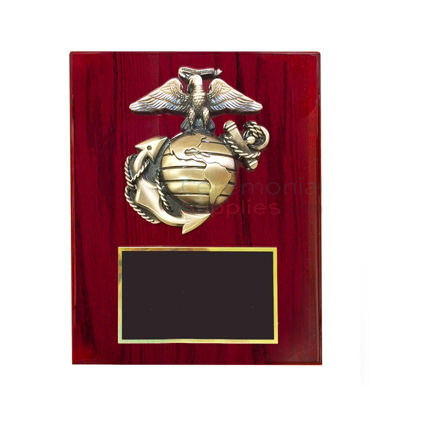 Generally, ceremonial award plaques follow a set structure; there is usually a base of an exotic polished wood, such as cherry, oak, birch, walnut or rosewood, and top of the base, there is a high gloss four-sided in-laid plate which can be made of fiberglass, polycarbonate or glass featuring ornate engravings which reveal the reason behind the receipt of the plaque.
Often the plaques may also feature a metallic finish to the borders, the base and/or the inlaid plate, which can be availed in either gold, silver or a bronze metallic color.
Ceremonial award plaques may also feature a decorative attachment in case the plaque is for a specific purpose, with the attachment being made out of wood, or another material finished in the same tones as the metallic trim featured on the plaque.
Attachments can usually be found on ceremonial award plaques intended for specific purposes, such as when judges are felicitated. It is often seen that the ceremonial award plaques given to them have a gavel attached to them as a representation of the judge’s service to the cause, whereas in the business world, a top earning salesperson may be awarded a plaque that features a symbol of income like a money bag or treasure chest.
Ceremonial award plaques given to recognize corporate or academic excellence may vary in design. In the case of corporate achievements, the plaque is adorned by a two-dimensional embossed metal, or metal finished figurine representing the achievement. In the case of an academic achievement, the figurine might get replaced with a book, or in cases where an accoutrement is an option instead of a necessity, it is foregone with the plaque being dominated solely by the presence of the inlaid plate.

Choosing the right award plaque for corporate business ceremonies can often be a dainty task even if the purpose for which it is to be awarded has been clearly identified, because of the sheer abundance of varying designs.
In a bid to permeate an absence of hassles throughout the buying process, CeremonialSupplies.com organizes corporate ceremonial award plaques according to most commonly used parameters, thus greatly simplifying the option identification process. Once the parameters are fed into the system, the right ceremonial award plaque can easily be chosen from the multiple available designs, and with the ease of the check-out process, you can be assured your purchase will be in your hands just in time to felicitate your corporate achievers!